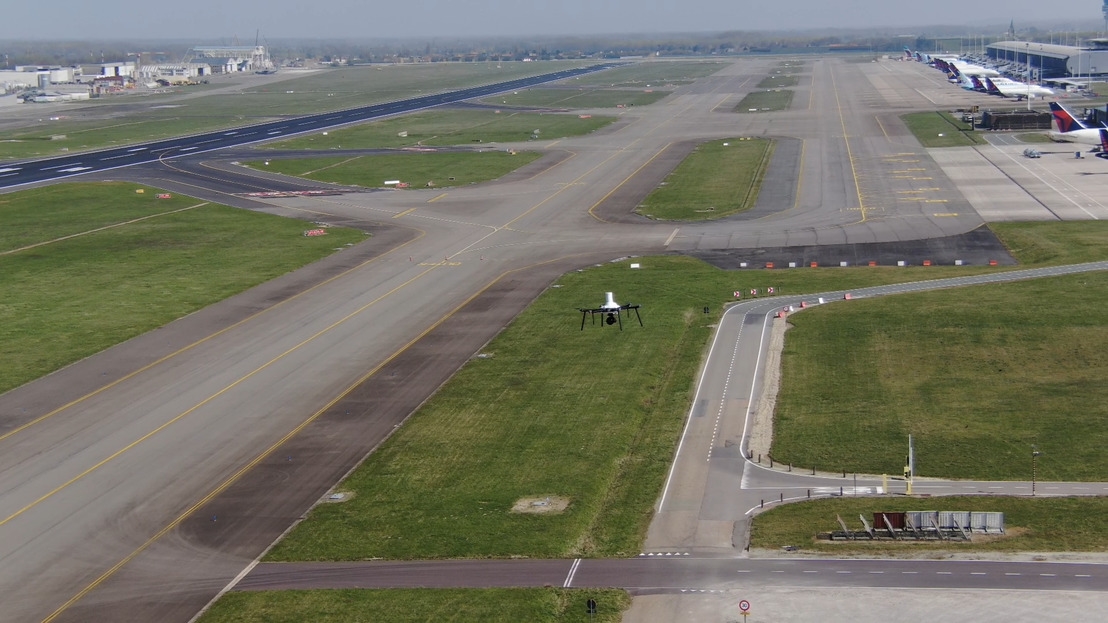 Brussels Airport and skeyes are testing the operational use of drones at and around the airport this week. In a secure environment, an innovative safety drone is deployed, which can be controlled from a large distance to find out how drones can increase the safety, security and efficiency of airport operations. In addition, a drone detection system is being tested to detect unwanted drones, as these are not allowed in normal circumstances at and around the airport.

Drones and aircraft are not a good combination, which is why drones are prohibited at and around the airport. A stray drone can create very dangerous situations for air traffic. The only exception is the safety drone that Brussels Airport and skeyes are testing in close cooperation. During two test days on 31 March and 1 April the possibilities and operational procedures of such a safety drone are investigated.

Given the large surface area of the airport, a drone can be a means of quickly gaining a unique perspective of the situation at a particular location on the airport grounds. In cooperation with Citymesh, drone operator and partner for the private 5G network at the airport, a safety drone was tested for the first time today at Brussels Airport. The special feature of this drone is that it can be controlled from a very large distance through the private 5G network at the airport. For this test the Citymesh drone pilot was not on site, but in West Flanders (Bruges). Via 5G he controlled the drone "beyond visual line of sight", which is a first for an airport!

There are various activities at the airport for which drones could provide added value. During the test days, it will be investigated how the drone can be used for inspection rounds on the grounds and for monitoring the airport area, where the drone can function as remote binoculars in addition to physical inspections. A second simulation concerns an aircraft incident where a drone can arrive very quickly to get a first impression of the situation and to be able to already pass on important information to the emergency services. A drone could also be used for animal-related inspections, such as for birds or rabbits, at the airport, as these animals can be dangerous to aircrafts taking off or landing.

Arnaud Feist, Brussels Airport CEO: “It is important for our airport to continue to focus on innovation. Although drones and aviation do not initially seem like a good combination, this is a new reality, the possibilities of which must be explored. Today, thanks to our private 5G network, we managed to control a drone remotely, which is an innovative first together with our partners. Drones can be additional tools in our operations, and these tests will give us more insight into the possibilities.”

Johan Decuyper, skeyes CEO: “skeyes has been building drone-related expertise for a long time. We often work on real-life test projects. This was a first test in our 'natural habitat': an airport environment. The first test day has already shown that drones can also be put to very good use here. We want to explore the possibilities as much as possible together with our airport partners. But of course always with our first concern in mind: the safety of the whole of air traffic.”

A drone is not allowed in the vicinity of the airport. Signs indicating a "no drone zone" can be found around the airport for the safety of air traffic. Because drones are becoming more and more common, the second objective of the test days was to find out whether drones could be detected in the vicinity of the airport using a combination of various technologies. This allows for the detection of both cooperative drones, the flight of which is authorised and which share their location, and non-cooperative drones. Several drones will be used during the test to subsequently identify them.

A drone operator must contact the regulator to request their flight in advance. During the test, it is checked whether the flight authorisation data correspond to the flight actually performed. In addition to visual observation by pilots, airport security or air traffic controllers, detection via high-tech systems is the only way of quickly discovering non-authorised flights. On the drone traffic management platform of SkeyDrone, a subsidiary of skeyes, the data from the drone detections and flight authorisations are compared, processed and visualised. Based on these results, it is now possible to further investigate which technologies can offer the greatest added value.

These tests have been prepared for a long time in advance. Obviously, they must not jeopardise air traffic and they may disrupt regular airport operations as little as possible. The test moments were coordinated with the air traffic, taking into account the weather conditions. Part of the runways were closed off for this purpose. Activities on and around the runways were kept to a minimum so that the drones could always keep enough distance from people, buildings and aircraft. Everything happens in close cooperation between the air traffic controllers in the tower and the Airport Operations Centre of Brussels Airport.

Since the entry into force of the new European legislation on drones, skeyes is responsible for authorising drone flights in the airspace around Belgian airports. Drone pilots who want to fly their drones around an airport have to apply for flight authorisation with skeyes via the DSA (Drone Service Application), a tool especially developed for this purpose by SkeyDrone. Through the DSA application, both the pilot and skeyes can follow the flight in real time. All test flights that have been taking place this week were planned in coordination with the air traffic controllers.

In the future, mobility as a service will improve intermodality, connecting many modes of transport into seamless door-to-door services for people and goods. There will be more diverse aircraft in the European skies than ever before, and (civil and military) drones will be completely and seamlessly integrated into all environments and classes of airspace, operating safely and efficiently alongside manned aircraft. 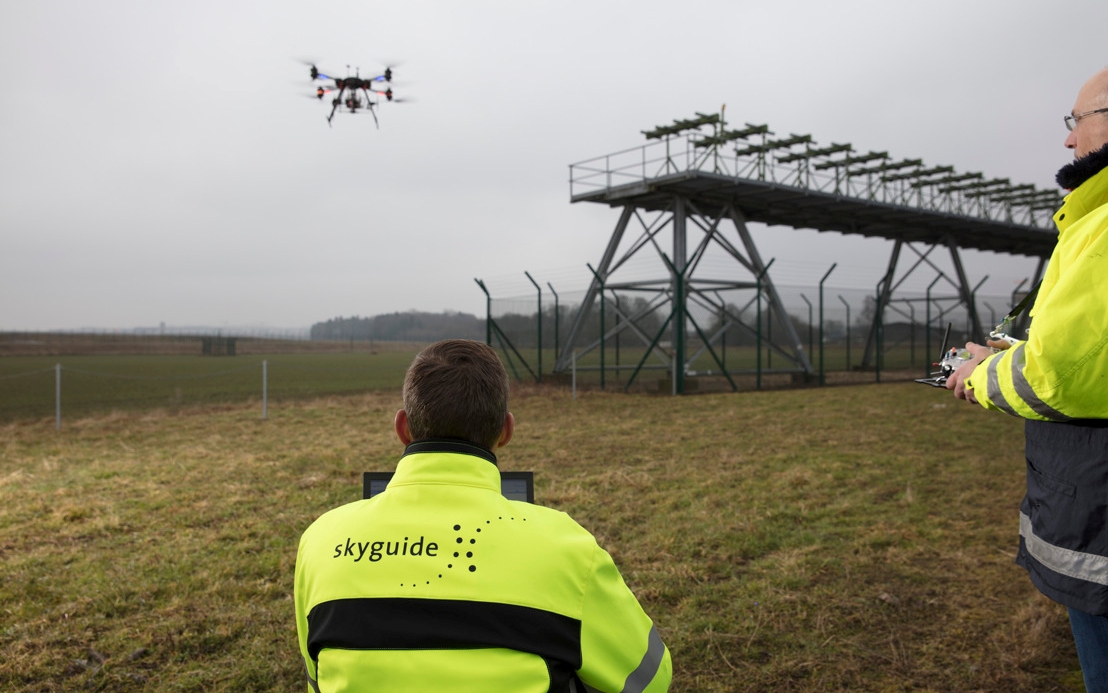 The Belgian air navigation service provider skeyes will in future rely on a CNS (Communication, Navigation, Surveillance) drone specially developed by its Swiss counterpart Skyguide to check the performance of navigation aids. 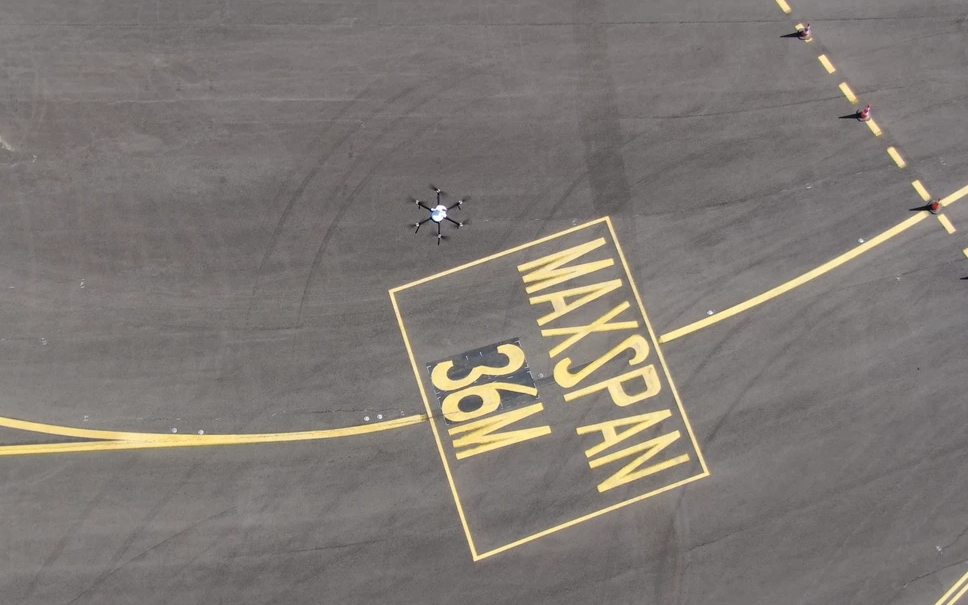 On 31 December 2020, the new European regulations on drones came into force. These have farreaching consequences for air traffic. After six months, skeyes will make an initial evaluation.